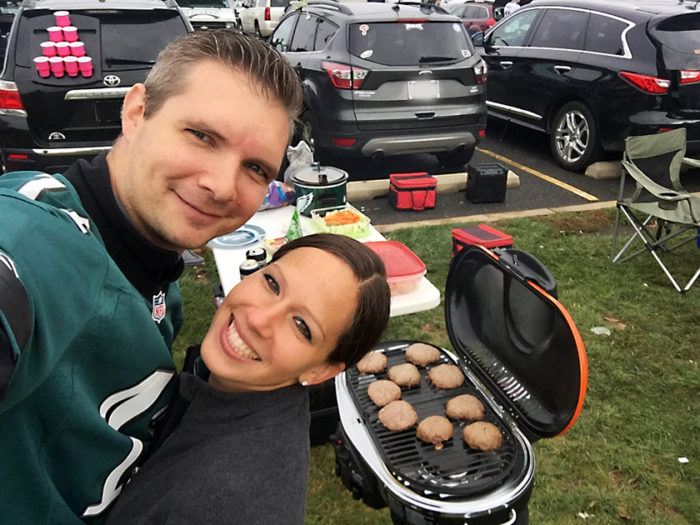 Who am I? My name is Kate (aka Tailgate Wife) and well, I’m pretty sure I was made for tailgating.

Nature and nurture and all of that…

The Early Beginnings of Tailgate Wife

While I was still in utero, my parents had an argument over my future name. (I enjoy this story immensely.) My dad had wanted to call me “TD” for touchdown.

(I’m still not sure if the T was for my first name and the D would have been my last initial, or if it was like the female equivalent of JD or RJ.)

My mom had something a little more feminine picked out.

Needless to say, my mom shot down that name idea faster than Philly Eagles fans flooded the streets on February 8, 2018 for the Philadelphia Eagles Super Bowl Parade. But I digress.

Although I ended up with a normal name, football still remained a huge influence in my life.

I still remember my dad calling those colored foil Easter eggs “chocolate footballs” when I was two or three and ever since, and I’ve watched literally countless hours of football to date.

Threads of Football, Woven Through Life

I’ve played sports all my life and even started a women’s rugby team in college, since girls couldn’t play football.

Screw that, I say! Make your own way…

Now I’ve stepped aside from playing, realizing that a broken arm or collarbone would probably inhibit my amateur chefdom or my child-rearing prowess.

Lord knows I need both hands to chase around our two adorable, feisty little mini Eagles fans, throw frisbees for our awesome border collie, and crank out the articles and content for my own sites as well as client work.

My husband and I were college sweethearts, bonding over Philly sports and cheap beer.

(Before you ask, I still love Key Lite.)

He calls me “wife bear,” but I had to change it to “wifebird” for this site, because, well, Da Bears.

And we couldn’t have that. Hubs and I are your typical die-hard Philadelphia Eagles fans.

I grew up in a family that loved all the Philadelphia teams and grew even closer to the Eagles and Flyers after starting my own family.

(Even our dog gets excited during the games – she can tell what’s happening by the escalation of the announcers’ voices. And probably our body language, or cursing and screaming at the TV. But definitely by the announcing…)

Our little girls love the Eagles, know the fight song by heart, and I’m pretty sure it was a major highlight when they met Donnie Jones a few years ago…

For our tailgates, and pretty much any event I host, I always channel my inner Italian grandmother vibe by making way more food than anyone would ever eat at a tailgate or otherwise…

because, you know, running out of food would be the absolute next possible worst thing after losing the game. (Which we don’t talk about in this house!!)

Or maybe even worse…

I mean, because according to the laws of sports fan superstition, it’s totally conceivable that a #tailgatefail could actually cause a home team loss, right?

But don’t worry – I’m here to remind you about all of that and more!

Onto my other half, who is the total life of the party with a true heart of green.

I mean, he will literally Bleed. Out. Green. if the Eagles do that thing we don’t talk about in this house…

When we were in college, he once even locked himself in his room for three days after the Eagles blew it in the Conference Championship game against the Bucs in January 2003.

We had been dating for a while and I genuinely questioned his ability to sustain himself if I didn’t come over and force him to eat even back then… he’s lucky I’m sweet like that. 🙂

We’ve really enjoyed our seasons with the Eagles and I noticed a bit of a shortage in fun tailgating sites, especially with a female voice, and especially locally, so I decided to start one.

I love the Eagles, I love tailgating, and I’m excited to share our tailgate games, tailgate food ideas, tailgating hacks, recipes, and more with you guys.

I also invite you to reach out any time with questions, feedback, or suggestions!