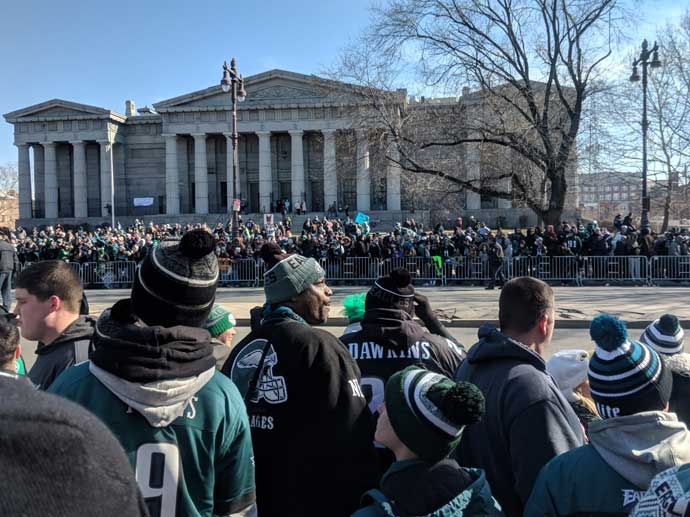 Adrenaline. Jubilation. Incredulity. That odd yet so energizing “Is this real life?” feeling… It’s impossible to put into words all the emotions we experienced the year the Philadelphia Eagles went on to win the Super Bowl.

We weathered every temperature, sweating it out on opening day, drenched and scorched from the sun.

Freezing our asses off in a bomb cyclone tailgate on New Year’s Eve, fighting to get our numb lips to drink our icy beers faster than they could freeze.

Joy immersed us as it felt like our Birds continued to win battle after battle for what felt like every single game during that journey to an incredible 13-3 regular season record.

A record that kept getting better with each passing week as we found all the stars aligned in all the right places.

And all the while, it felt like if we just kept tailgating hard enough, they would just keep winning.

In some surreal alignment of the stars, Nick Foles picked up where Carson left off and we smashed the Vikings in the 2018 NFC Championship Game 38-7.

That was a great game.

That was an incredible tailgate.

Such a good time that I actually lost my phone that day. Whoops.

Not like me at all, and that part stinks, but I luckily lost only the photos from that day on my phone.

The memories will stay with me forever.

The Underdogs vibe carried us through the season toward the emerald glow of immortality.

A glow we’d dreamed of our entire lives.

A triumph we didn’t know we would ever get to experience in our lifetimes.

And yet, in another twist of fate, we celebrated the Eagles-Patriots matchup in Super Bowl LII with a Super Bowl party that fell on my birthday.

A moment locked in time when our home team rose to the occasion and battled one of the greatest in history. Battled, and won.

Our youngest daughter was only two years old at the time and she STILL talks about “Mommy’s Eagles Birthday” and wanting to have another one.

I believe that next moment is out there. Somewhere in the stars, another unforgettable Eagles season awaits.

I can’t imagine how or when we’ll get there, as I’m just too enamored with the beautiful narrative that was our Philadelphia Eagles’ Super Bowl legacy.

The energy, the conflict and resolution, the emotion, and the perfect alignment of the stars—I would not change a thing.

I don’t know what the next chapter will look like, but for now, I’m just so glad to be along for the ride.